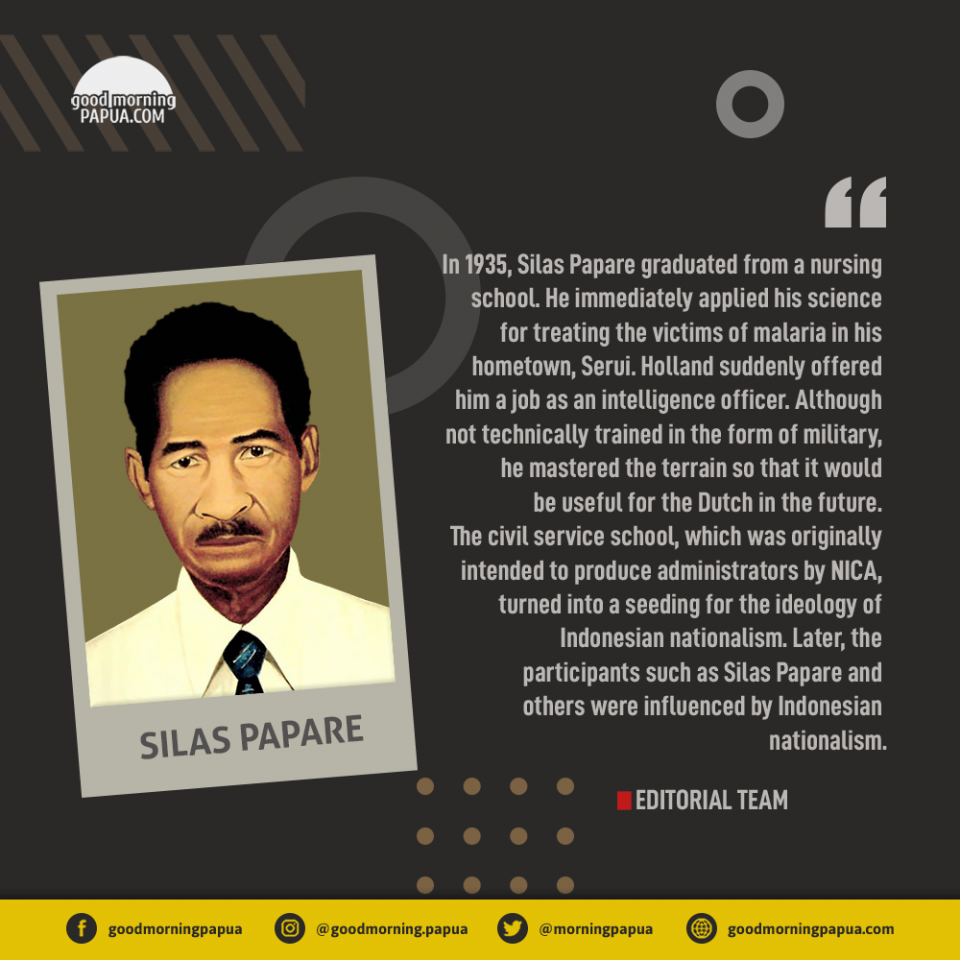 In 1935, Silas Papare graduated from a nursing school. He immediately applied his science for treating the victims of malaria, which at that time was rampant in his hometown, Serui. Good territorial control is a blessing in itself for Silas because it makes it easier for him to go around all corners of Serui.

Shortly after serving the nursing profession, Holland suddenly offered him a job as an intelligence officer, a job he had never imagined before. Although not technically trained in the form of military, he mastered the terrain so that it would be useful for the Dutch in the future. Approving with the offer, Silas, who was born in 1918, in the end have a dual profession: a nurse and a Dutch intelligence officer.

Work as an intelligence officer made Silas known for his achievements, because he was considered successful when helping the Allies against the Japanese. Onnie Lumintang, et al, in the Biography of National Heroes Marthin Indey and Silas Papare (1997: 64-65) mention that Silas was awarded an award by the Dutch government and the US military. The arrival of the Japanese who acted arbitrarily in Papua made the local people furious.

In many times, they fought the Japanese, as in the rebellions in Biak and Yapen Waropen around 1942. However, these resistances failed. Seeing this fact, Silas used his skills as an intelligence. He infiltrated the forests to put together strength and succeeded in gathering people from various regions, like Biak, Yapen Waropen, Nabire, and Wandamen.

However, realizing that he could not rely solely on the power of the people, he was finally linked to the Allies. This cooperation was first established in April 1944 when Allied troops under the command of General Douglas MacArthur succeeded in attacking the Japanese power base, Hollandia—now called Jayapura. There, Silas made contact with the Allies and assisted him as a guide to fighter planes seeking to invade. The Allied forces finally managed to narrow the Japanese territory until it was weakened on July 5, 1944.

The arrival of the Allies and the emergence of resistance which later became known as the Battle of Namfor awakened the spirit of the people against Japan. At its peak, on August 10-September 22, 1944, they attacked the Japanese defense bases in Warenai and Manokrawi. Japan lost and its occupation on Cendrawasih Bay ended.

After the Japanese left, the Netherlands-Indies Civil Administration (NICA) came to take over Papua. Under the leadership of Van Eechod, NICA seeks to improve governance in Papua. One of his policies was to establish a civil service course in the city of Nica—now Kampung Harapan, Hollandia, and appoint Soegoro Atmoprasodjo as a course leader at the end of 1945.

Previously, Soegoro was a nationalist who worked in Taman Siswa Yogyakarta as well as an ex-Digulis who fled to Australia when the Japanese arrived. The civil service school, which was originally intended to produce administrators, turned into a seeding for the ideology of Indonesian nationalism. Later, the participants such as Silas Papare, Frans Kaisepo, Marthen Indey, and others were influenced by Indonesian nationalism.

Silas Papare died on March 7, 1973, this day 48 years ago. On September 16, 1993, the government of the Republic of Indonesia stipulated him a national hero.

Good News, Timsus and Timsin Accomplish the Bill for the Region Division of Papua

With Minimum Facilities, Children in Papua Remains to be Eager to learn