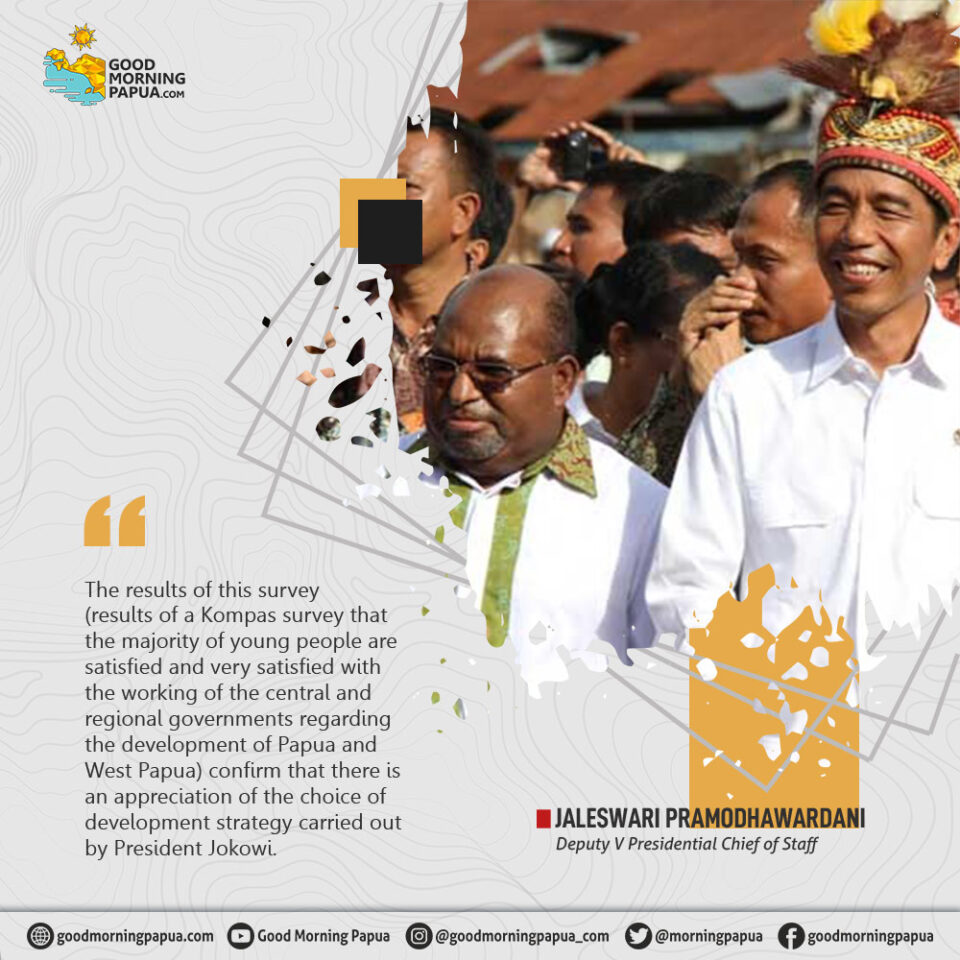 goodmorningpapua.com – A Deputy V Presidential Chief of Staff, Jaleswari Pramodhawardani, said the hard work of the government of President Joko Widodo (Jokowi) in building the welfare of the people of Papua and West Papua has received appreciation from groups of young people in Papua.

Jaleswari’s statement refers to the results of a Kompas survey that the majority of young people are satisfied and very satisfied with the working of the central and regional governments regarding the development of Papua and West Papua.

“The results of this survey confirm that there is an appreciation of the choice of development strategy carried out by President Jokowi,” said Jaleswari at the Bina Graha building, Jakarta, Thursday (9/6).

He revealed that Jokowi in issuing policies related to the development of the welfare of the people of Papua and West Papua was very concerned about the perspective of young people. This is because young people in Papua are close to welfare issues because they can immediately feel the benefits.

“By paying attention to the younger generation, the government is building the future of Papua from now on,” he said.

Jokowi’s attention to the development of the potential of Papuan youth is demonstrated by the construction of the Papua Your Creative Hub in Jayapura, on October 2, 2021. It is hoped that this place will become a center for the development and empowerment of young people in Papua.

“The president believes there is still a lot of unexplored and undeveloped potential. That is the task of the government and all of us,” he said.

Jaleswari added that Jokowi had put the development of human resources as a top priority, so that Indonesia’s demographic bonus could give real results. For this reason, Jokowi is very concerned about developing the potential of young people, especially in Papua.

He reiterated Jokowi’s commitment in creating Papuan development that focuses on an Indonesia-centric doctrine. This is stated in Presidential Instruction No. 9/2020 regarding the acceleration of the welfare development of the Papuan people, and Law No. 2/2021 concerning Special Autonomy (Otsus) for Papua.

As an implementation, the government focuses on five main areas, namely human resource development, the local economy, the environment, basic and digital infrastructure, and governance.

Kompas released the results of a survey on the level of satisfaction with the performance of the central and local governments. The survey was conducted on young people (20-39 years old) in five cities in Papua and West Papua, namely Jayapura, Merauke, Sorong, Manokwari, and Timika.

In the survey, respondents said they were satisfied and very satisfied with the working of the central and local governments. Namely in the fields of politics and security, law enforcement, economy, health, education, and socio-culture.

Porkab II Jayapura Is Able to Bring About to Archery Athletes