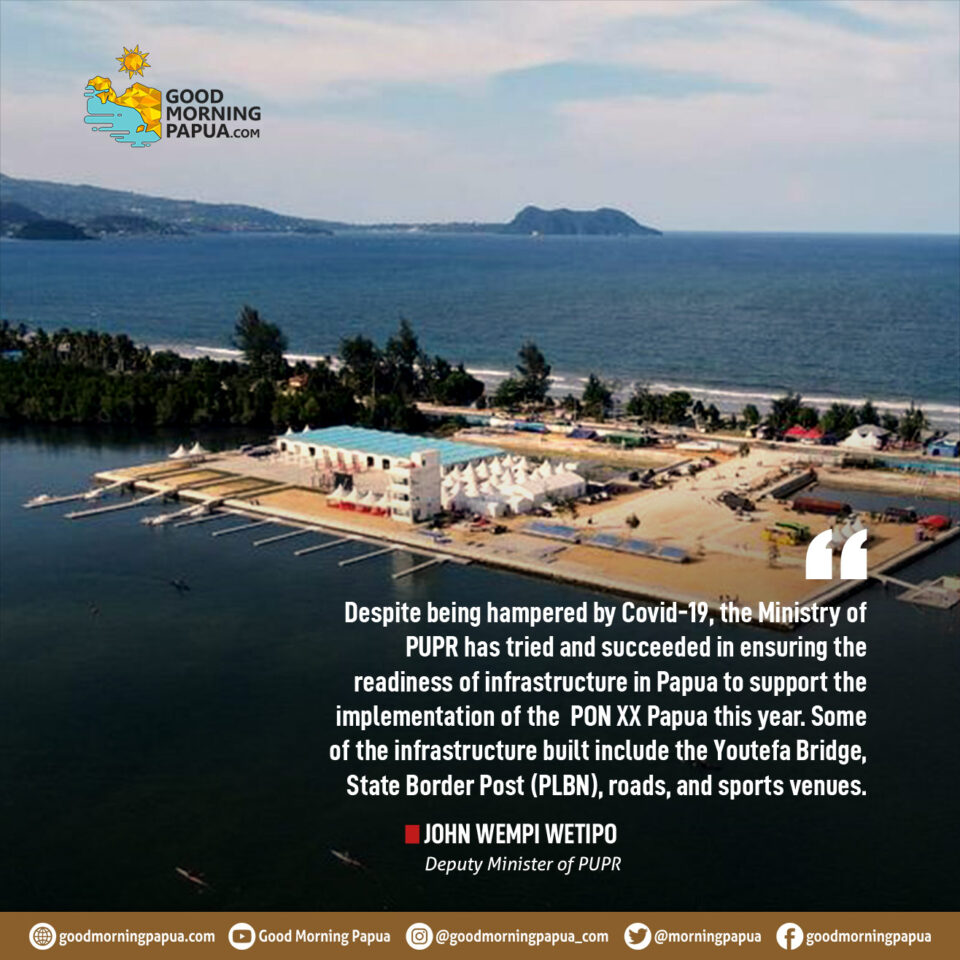 A Deputy Minister of PUPR John Wempi Wetipo said that despite being hampered by Covid-19, the Ministry of PUPR has tried and succeeded in ensuring the readiness of infrastructure in Papua to support the implementation of the  PON XX Papua this year. Some of the infrastructure built include the Youtefa Bridge, State Border Post (PLBN), roads, and sports venues. “In addition, we are also working with local governments to fix various tourist areas in Papua,” said Wempi, Monday (04/20/2021).

So, it is hoped that PON athletes can directly witness  that development in Papua is not inferior to other provinces.

To support the implementation of the XX Papua PON, the Ministry of A Minister of PUPR has built 7 sports venues, including the Aquatic arena and Istora Papua Bangkit in Harapan Village, East Sentani District. Then, the Cricket arena and the Hockey Field (Indoor and Outdoor) in Kampung Doyo Baru, Waibu District. As well as, three other venues, namely the Roller Skate arena in the Waena Campground area, the Rowing arena above Youtefa Bay, and the Archery arena in Harapan Village, East Sentani District. In addition to building 7 sports venues, the Ministry of PUPR has also built various other infrastructure facilities. Including connectivity infrastructure to facilitate accessibility and mobility in Papua.

For example, the building of the Telaga Ria–Khalkote–Dapur Papua road in Jayapura Regency along the 5.16 km, the improvement of the Merauke–Kuprik–Tanah Miring road along the 7.36 km to support motor racing activities in Merauke Regency. Furthermore, it was also bulit the supporting infrastructure facilities such as drainage and sanitation, construction of 6 (six) flats for athletes’ homestays in Jayapura City, Jayapura Regency, and Merauke Regency. The Integrated PLBN of Sota was also built in Merauke Regency which was just inaugurated by President Jokowi on Sunday (03/20/2021).

The second PLBN in Papua after the Skouw PLBN. John added that the completion of various infrastructures in Papua could not be separated from the support and will of the local government and Papuans. So that Papua can rise from the pandemic condition and change for the better.

“If it is only driven by the will of the central government, of course, the implementation of this PON will not be carried out properly, especially with the existence of pandemic obstacles,” added John.

Equitable Access to Digital Infrastructure, One Village One BTS in Papua

Rp.1 Billion Bonus for Papuan Athletes Who Win Gold Medals Has Been Budgeted by the Papua Provincial Government from Silpa

Celebrating Harkesal, a Mass Circumcision for 100 Children in Manokwari