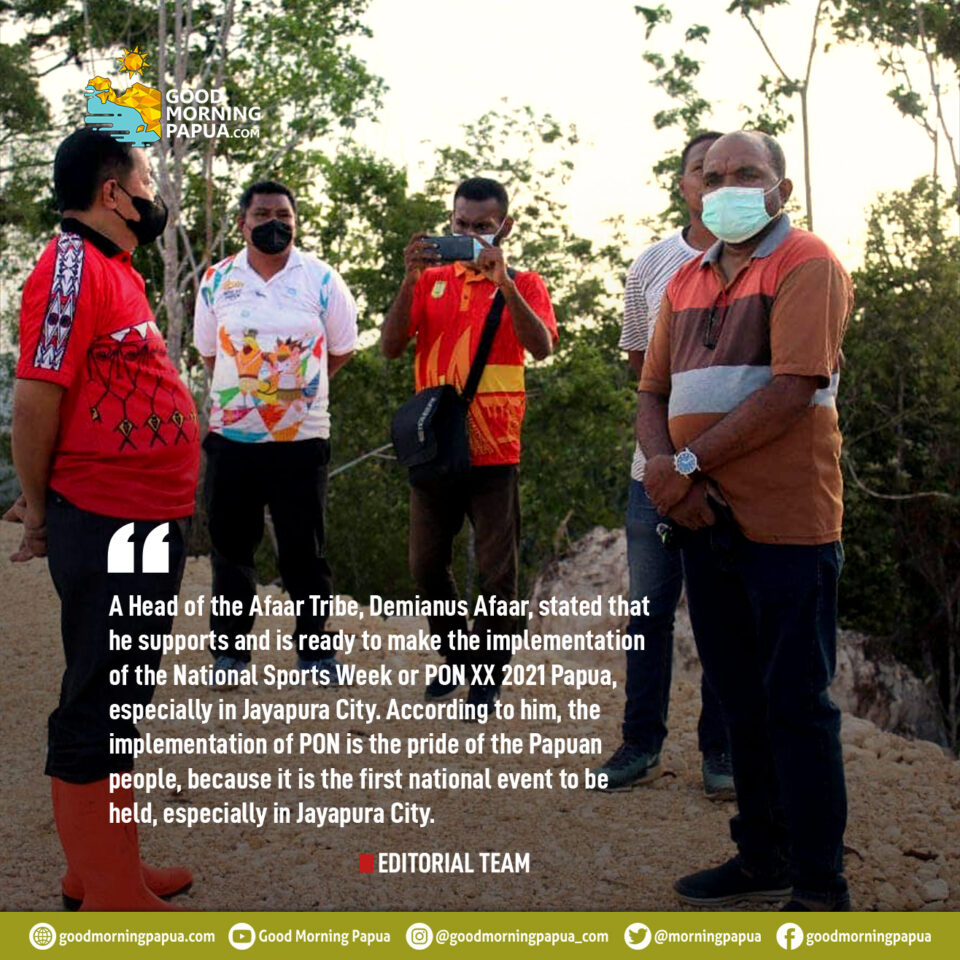 goodmorningpapua.com – A Head of the Afaar Tribe, Demianus Afaar, stated that he supports and is ready to make the implementation of the National Sports Week or PON XX 2021 Papua, especially in Jayapura City.

One of the sports, namely paragliding, will be competed in Buton Skyline Village, South Jayapura District, Jayapura City.

“We, from the customs of the owners of ulayat rights, are very supportive,” said Demianus Afaar while accompanying the Deputy Chair of the Jayapura City PON Sub-PB, Rustan Saru, inspecting the paragliding venue, Monday (13/9/2021).

According to Afaar, the implementation of PON is the pride of the Papuan people, because it is the first national event to be held, especially in Jayapura City.

“It’s just that we need to pay attention to our rights. We do not sell, but only allow us to use [paragliding venues] to be used as a place to compete for paragliding athletes,” said Afaat.

A Deputy Chairperson of the Sub-PB PON Jayapura City, Rustan Saru, expressed his gratitude for the support of the customs who have allowed their customary area to be used as a place for paragliding athlete competitions.

“Regarding the request for adat [rights], we will immediately communicate with the Head of Sub-PB PON Jayapura City to provide a solution so that customary rights can be fulfilled. All PON venues in Jayapura City have customary support, so there is no barricade activity in the PON arena,” said Rustan.

Rustan added that the paragliding venue with a height of 320 meters above sea level or MDPL is guaranteed to be safe, both from the facilities and infrastructure as well as the competition.

“It is estimated that this September 19, the 500-meter road access to the competition arena has been completed. We hope that the work will be completed on time, because on September 29, the paragliding competition will start,” said Rustan.

Rustan, who also serves as Deputy Mayor of Jayapura, said that in addition to road access, supporting facilities that need to be equipped are carpets for athletes (where to jump).

“There are nine provinces that will compete here [paragliding venue] including Papua. My hope is that our athletes can win gold in paragliding,” said Rustan.

YPK Remains Within the Frame of GKI Tanah Papua

Vice President: We Must Listen to the Aspirations of the Papuan People

Christmas with the Papuan People

Welcoming Ramadan, A Number of Organizations in West Papua Province Spread the Koran